Game of Cones is his debut novella, available on Amazon. 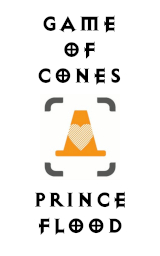 The Starship Sustainable Enterprise is on a Five Hundred Year mission: to explore strange new worlds; to seek out new life and new civilizations; to boldly go where no man has gone before; and to do it all on recycled starlight.

Things are going just fine until the ship hits a magic field surrounding a fantasy planet.

Captain Curt orders the ever-irritating, ever-smooth, green-blooded Halfling, First Officer Blot, to beam down to the surface. Blot finds a strange old world where the lettuces are smarter than the people, an intense redhead tells him he knows nothing, winter has come, schoolboys are leering over a scroll entitled Hot Elvish Babes, a marauding Black Dragon is slaying knights, and heresy regarding the Sacred Text of the Fantasy has been committed,

The perpetrators, Ser Peter, Son of Jack and Maester George Remy Remy Martin, must burn. But, worst of all, the dignity of the Princess Blonde has been affronted by an ambitious general. This vile treason enrages the King and his fury upsets the delicate political balance of the Sixteen Kingdoms, threating a tedious civil war that could go on for six thousand unending pages.

With chaos threatening the Realm, it is up to Minion, Daughter of Minion, a heroic bureaucrat, to restore order and save the day.

When you play the Game of Cones, there is no win. You lose or you die.

Captain's Log Stardate: [Error: The server time.starfleet.mil is not accessible.]

We were somewhere past a burnt mother planet on the outer spiral of an extremely naff galaxy when the ship fell out of warp drive as it hit a magic field.

I was up to my nuts in the Comrade Yogini's guts and my hard-pumping loins were flung out and up and around and down and my ass hit the ceiling. Yet I was still humping my green-skinned darling. Nor had I missed a beat. For I am Captain James T. Curt of the Starship Sustainable Enterprise not some soft-cocked bureaucrat. And the T, in case you are wondering, stands for Testosterone.

Comrade Ship's Engineer Brogue came through on the intercom to my quarters. Some seconds elapsed as the ship lurched crazily through the warped magic.

And I shagged her.

I shagged the green yogini on the ceiling. I shagged her on the floor. I shagged her on the port, starboard, for'ard and aft walls. I shagged her like I would never surrender. For surrender is not a word in my vocabulary. And then the green one came with a roaring shriek that filled the ship with Tantric ecstasy and I was on the floor and the ceiling was back to 'up' and the walls back to 'side' and the Comrade Yogini's yoni was riding my lingam like a lion grinding a cheese grater. And she yowled like the howling screamer she was as she ground out her orgasm upon me.

"Sweet baby Jesus! Sweet baby Jesus!" she roared in metronomic time to her grinding, riding, thrusts. And then a final scream. Her head tilted back and her lungs emptied in a vocal wailing rush as she cried, "OH VAJRAYOGINI!" Sated and exhausted, she came to a quivering stop.

Her ecumenical ecstasies ceased and she let herself transition with sated, exhausted and yet balletic grace from reverse cowgirl to foetal slump atop me.

And, still within the Comrade Yogini, I took Brogueâs call.

"Would that be yourself, Captain?" enquired Brogue in his thick Irish accent.

"It would, Comrade Brogue. Damage report."

"Nary a scratch. Barely a dent in the Kick Arse Titanium Alloy. Sensors report all life support systems go. However, the warp drive has failed. Iâm after looking into it now."

I made another call. "Curt to Bridge," I said.

"The ship hit a magic field which caused it to career out of warp in an uncontrolled manner. The Sustainable Enterprise is running on impulse power."

"Very good, Mr. Blot. Carry on. I will be on the bridge directly."

I called the sick bay.

"Not one, Jim. A few tumbles but the nano tech has fixed the three crew whose necks broke and the six others with spinal injuries. I have to be honest with you. There is not much point having a medical officer on a starship these days. The nano tech has made us all redundant."

The Comrade Shipâs Yogini rolled off me, dripping onto the floor.

She lay on her back, her eyes glazed, still panting in ardour.

"Groans, I am sending you the Comrade Ship's Yogini."

"Nothing wrong with her lungs, Jim. She's conscious and breathing."

The distance between Sick Bay and my quarters was nine hundred and sixty-three metres of soundproofed Kick Arse Titanium Alloy.

"Give her a glucose shot or something," I commanded.

"Curt out," I said, clicking my communicator shut.

"Report to Sick Bay. That's an order," I said to the Comrade Ship's Yogini. She glared at me with intense petulance, pulled on her clothes in silent, sultry fury and left. Life is a lot smoother when you can pull rank on your women. Especially the green ones.

I dressed and strode to the bridge. On arriving I noted from the big letters on the wide screen that we were still proceeding on impulse drive.

"Comrade Zhivago, what is status of magic field?" I said, lapsing into Rusklish.

"Is biggest I ever seen, Comrade Captain. I fear wurst."

"I fear that ship will be irretrievably damaged, or wurst, we will encounter vastly superior alien technology that will shit on us like bear in woods, Captain."

"From where does originate field?"

"Is centred on planet dead ahead."

"On screen," I said. The big Cyrillic letters disappeared and were replaced by an image of the planet, a blue-green water world in the sweet spot of distance from its binary yellow stars that would support carbon-based life.

"Negative, Captain," said Blot. "Our sensors show no signs of life. I think they may be compromised."

"What do you mean, compromised?"

"It could be this planet belongs to a civilization far more advanced than ours, that has figured out that manned deep space exploration is utterly pointless and a complete waste of time and lives."

"What makes you say that?"

"They put an error message in the sensor interface."

"What! The Sustainable Enterprise has been hacked?"

"That would be a logical conclusion, Captain."

"What does the error message say?"

"I donât know exactly. The Shipâs Translator and Communications Officer is not on board."

"What does the machine translator say?"

"Your presence in the Gonzo System is unauthorised. Your warp drive has been disabled. Emergency communications are permitted. By Order of the Star Council pp. Lord SCIRT of House Mayhem."

"Mr. Blot, beam down to the planet and investigate. Take two men from Security."

"We have none left, Captain."

"We ran out of security fifty-six years ago, Comrade Captain. The unfortunate incident with the Romulan Time Travellerâs Wife."

I paused, recollecting the temporal anomaly and the ensuing splatterfest. If you think Romulan men are bad ass when they go through a time warp, you should meet the women. A Romulana's zest for giving head is matched only by her zest for taking head. Her weapons of choice: ancestral battle scythes and fire-breathing dragon drones.

"Ah yes, I remember," I said. "Go yourself then. Beam down. Search for intelligent life, make contact with their leader and report."

With that, Mr. Blot left the bridge heading for the Transporter Room and I made myself comfortable in the Big Red Chair.